With more than 20 years’ experience as a civil engineer specialising in underground construction, Izzy Piet is the project manager overseeing the three mini tunnel boring machines (TBMs) that will soon get to work digging a vital piece of sewer network in Melbourne’s north east – a critical step preparing for the North East Link.

Originally from the Netherlands, a senior role on Victoria’s biggest ever road project now sees her call Melbourne home.

Her advice to women considering a career in engineering or construction:

“If you like construction and engineering, get out there and do it.”

“It takes a lot of diverse people and experience to deliver Victoria’s transport construction projects and there are lots of different fields available – in addition to engineering, we need people with expertise in environment and planning, stakeholder relations – construction needs more than just the people who build things.”

Engineering first caught Izzy’s eye as a career option when, as a keen surfer, a chance meeting with an industrial designer who designed and built surfboards prompted her interest in technical design and building.

Studies in civil engineering and underground construction at the Delft University of Technology (just north of Rotterdam) led to work on what was then the largest tunnel project in the World – the Groene Hart rail tunnel.

In a career highlight, she trained as a tunnel boring machine pilot, breaking ground as one of the first women in the world to hold this role. Even as recently as the early 2000s, she met some hesitance when wanting to train in a job that had historically been done by men, but proved herself in the role.  The highly technical work required her to operate the hyperbaric compartment locks, including undertaking medical training to manage a team working underground in a pressurised environment.

A role on Brisbane’s Clem7 tunnel saw her move to Australia, where she set up a pre-cast yard to manufacture tunnel segments, with her expertise in tunnel segment production next taking her to Istanbul.

After working around the world, Izzy has observed that the construction industry in Australia is making good progress in developing programs and initiatives to attract and retain women.

Now working on Victoria’s North East Link, Izzy is looking forward to the launch of the project’s first 40-tonne mini TBM – which will soon be launched at Trinity Grammar School’s Marles Playing Fields. From there, it will dig up to 20 metres below the ground to shift the 1.8-kilometre Yarra East Main Sewer in Bulleen out of the way to allow for North East Link. 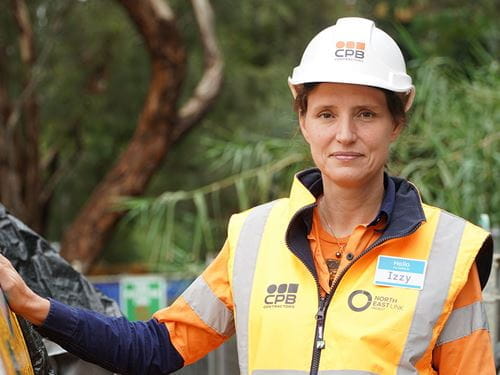